Skip to content
Previous Next
Schoolmeals for the coffee farmers’ kids

We just reached our third goal: Thanks to you we fully funded our school meal project. We already implemented the project during the coffee harvest time in November 2016. And these are the results!

Because we want to nudge the children to school! When we first met Wendmage Guta, the director of Bufeta Gibe school told us: „During coffee harvest time children often don’t come to school“. That’s a very inconvenient truth but we don’t want to ignore it. Even in certified fairtrade cooperatives like Bufeta Gibe (where child labor is forbidden) children help their parents during harvest time. This must not be a problem per se: In Switzerland the children of apple farmers also help their parents – but nonetheless they go to school! 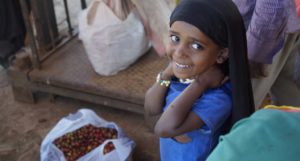 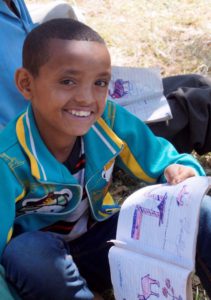 Bread and honey for attendance
We wanted to tackle this problem with a very easy trick: Food. Because school meals have proved to be a very successful means to attract children to school – and by that to improve test scores. That’s what Havard economist Kremer and World Bank economist Vermeersch found out in Kenya in a randomized trial study. School participation raised by around 30 percent in the schools that received subsidized meals compared to schools that did not take part in the project. 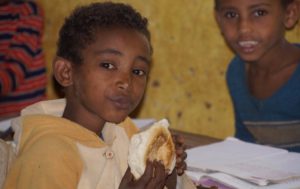 This year we did a one-week pilot project to find out whether providing school meals will also increase the attendance of the coffee farmer’s kids. And it did! As you can see on the pictures, the children loved their school meal! All children came to school during the project week – except one girl who was suffering from malaria. 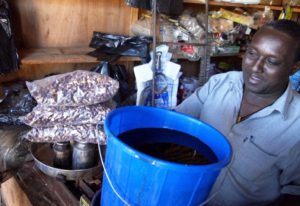 School meals for twice as many children

Wondering what is in the bucket? It’s 10kg of honey! The seller didn’t even have enough weights for this amount – he used three 1kg-bags of peanuts instead 🙂

Buying the honey was actually one of the biggest costs of the whole project. But we were very lucky because the local price of honey was quite low in November – the beekeepers had a plentiful harvest last year. That’s why we decided to increase the impact of the project by providing bread and honey not only to the kids of the morning shift like we had planned before, but also to the children of the afternoon shift. So in fact we supported two children with each of your coffee packages! 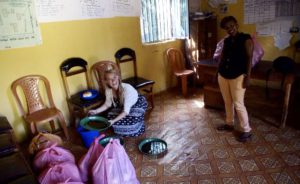 Dividing the honey on smaller plates for each class was quite a mess! But also fun. The pink plastic bags on the ground contain only a part of the 1000 breads we ordered for each day. To protect the environment we kept using the same bags for the whole project. 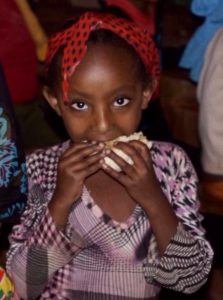 The organisation of the meals took us some time: We had to find a baker that had the capacity to bake an additional 1000 breads per day for the children, we bought 5 times 10kg of honey and we found a tuktuk driver who was willing to stuff his tuktuk with those 1000 breads and the honey to drive all the way from the bakery to the school which is a little outside the city.
But as soon as we saw the happy children munching the food we knew all the effort was way worth it!

Our pilot week was a great success. That’s why next year we want to increase the period to the main weeks of harvest which are around 4 weeks between November and December. As we cannot be sure about the price of the honey we will again plan with higher costs. In total, we therefore need 3880 packages of coffee to reach that goal. 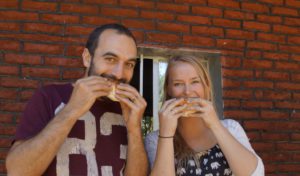 About the Author: Marie Tuil